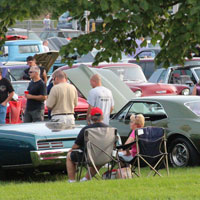 (Please note: Ms. Kerschner was incorrect in stating that David Fink is Chairman of the Board. He is currently Vice-Chair and Steve Bachman is Chair.)

From The Northwestern Press, by Elsa Kerschner

In the absence of Chairman David Fink, at the Sept. 12 Heidelberg supervisors’ meeting, Supervisor Steve Bachman asked for a moment of silence for “the events [9/11 terrorists attacks] of 12 years ago.”

According to Township Administrator Janice Bortz, supervisors are looking at about 0.35 mil to generate $92,000 in revenue based on the current total taxable assessed value.

The actual fire tax millage rate and the township tax millage rate for general purpose taxes will not be established until the December meeting with the adoption of the annual tax resolution.

The board approved a resolution stating the township will have a fire tax and revenues from that tax will be used by the Goodwill Fire Co. No. 1.

Vice President of the Goodwill Fire Company, Germansville, Paul Grothouse said state Rep. Gary Day, R-187th, previously told him there were ways for the fire company to raise more money but the company did not seem to think most of them were logical.

Changes in the Small Games of Chance law made it more difficult to raise money.

The Night in the Country celebration went well with most vendors taking in more money than last year, he said.

Bachman, who said Kathy Hermany is the main organizer for Night in the Country, thanked her.

Roadmaster Kevin Huber asked about taking the road crew to a chain saw class at $50 per person.

As there is still money in the budget for that purpose, there is no problem with the crew attending the class.

Township Administrator Janice Bortz reported she is working on upgrading the cell tower agreement with Crown Castle. The new agreement would be for 38 years.

Supervisors want to see the agreement before it is signed.

During public comment, resident Carl Breininger asked why a worker who was hired later was paid more than a worker hired in January.

Bachman said they hired at the rate at the beginning of the year and later needed a skilled person and hired at a higher rate. Breininger said that amounted to a double standard.

Breininger asked if the position was advertised. Bachman said it was not.

Bortz said there were applications on hand but none of the applicants had the necessary skills.