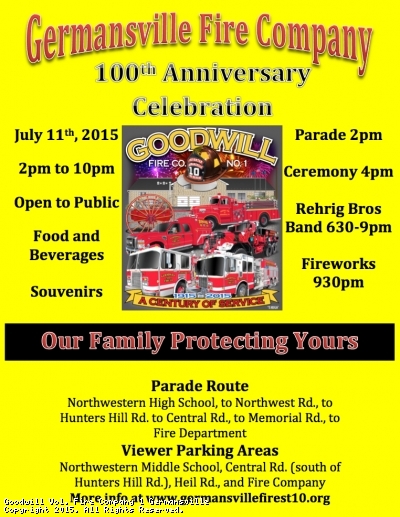 On July 11th 2015 the Goodwill Fire Company #1 of Germansville will be holding its 100th Anniversary celebration, including a community parade.

The parade will begin at approximately 2pm. We would ask that spectators try to spread themselves out along the parade route.

We understand this is a country parade and we lack sidewalks but please stay to the sides of the road and leave ample room for the parade to proceed.

There will also be parking available at Goodwill Fire Company 6011 Memorial Rd., which will grant spectator access to the village of Germansville to view the parade.

Roads in the area will be accessible prior to the beginning of the parade. At the time of the parade, all roads will be temporarily shut down and reopened as the parade passes. If you know someone along the parade route please make arrangements with him or her and arrive before the 2pm start time.

For the duration of the festivities, Memorial Rd. between Central Rd. and Bullhead Rd. will be closed (2pm to 10pm). This area will only be open to residents, guests, and emergency vehicles.

We would like to invite everyone back to the fire department for our ceremony, food, band, and fireworks, which will begin at approximately 4pm and last till around 10pm.

Best access to the fire department area would be from Hunters Hill Rd. or Bake Oven Rd. north into Germansville, or Mountain Rd. to Bake Oven Rd. south. Fire police will be directing at all intersections.

As part of the festivities, we will have the opening of our cornerstone, the keynote speaker State Fire Commissioner Tim Solobay, a fire department historical display, quilt signing, T-shirts and mugs for sale, The Rehrig Brothers Band from 630pm to 9pm, and an extravagant fireworks display, compliments of local residents, Mike Peters and Ryan Oncheck.

Come out and celebrate 100 years of dedicated service to our community!

Find out more about the Goodwill Fire Company #1 of Germansville.