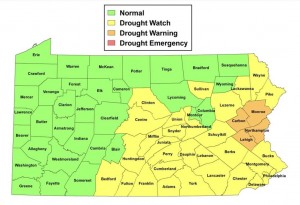 Harrisburg, PA –  The Pennsylvania Department of Environmental Protection (DEP) has declared a drought warning for four counties and increased the number of counties on drought watch status to 30, following a meeting Wednesday of the Commonwealth Drought Task Force.

“We’re asking residents and businesses, particularly in central and eastern counties, to use water wisely and follow simple water conservation tips to ease the demand for water,” said DEP Acting Secretary Patrick McDonnell. “We suggest that public water systems that implemented water restrictions this summer continue them to preserve their drinking water supplies.”

Data from the Commonwealth drought monitoring network show that dry conditions persisting in the middle of the state and lack of precipitation in the eastern part of the state have deepened precipitation deficits, resulting in extremely low stream flow and groundwater levels, particularly in the Lehigh Valley and surrounding areas in the Delaware River Basin.

However, to the west of the Appalachian Mountains and extending along the northern tier, above-average precipitation has improved precipitation, surface water, and ground water to normal or above normal levels.

A drought emergency has not been declared for any county. A drought emergency, which requires a proclamation from the Governor, calls for mandatory restrictions on nonessential water use to protect water supplies as well as public health and safety.

Through a cooperative program with the U.S. Geological Survey, DEP helps fund a statewide network of gauges to monitor groundwater levels and stream flows. This network provides the state’s drought coordinator with comprehensive data that are used to determine drought classifications. In addition to precipitation, groundwater and stream flow levels, DEP monitors soil moisture and water supply storage. The data are shared with other state and federal agency personnel on the task force.

Varying conditions under drought watch and warnings may dictate individual water suppliers or municipalities asking for more stringent conservation actions. DEP will be notifying all water suppliers in affected areas of the need to monitor their supplies and update their drought contingency plans as necessary.

DEP encourages all citizens to take steps to reduce their water use:

DEP also offers other water conservation recommendations and water audit procedures for commercial and industrial users, such as food processors, hotels and educational institutions. These recommendations and additional drought monitoring information are available on the DEP Drought Information website.