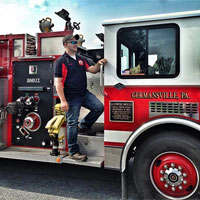 From the Northwestern Press
By ELSA KERSCHNER ekerschner@tnonline.com

Well, not really, because junior firefighters have to be at least age 14.

But, thanks to Assistant Chief Randy Metzger, Watson, now a senior firefighter, began hanging out at the fire station when he was 13. Metzger is married to Watson’s cousin.

“He [Metzger] was involved in the community, so I wanted to be, too,” Watson said. “It is a good feeling to help out.”

One fire that sticks out in his mind was at Woodbridge in Lowhill Township.

He works second shift, 3-11 p.m., at Mack Trucks, so he is available for nighttime and morning calls.