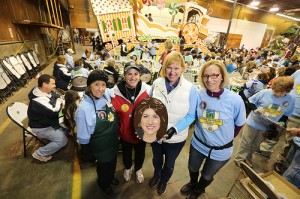 Krysta Hankee, of Heidelberg Township, will be featured on the 2014 Donate Life float set to appear in the Tournament of Roses Parade on New Year’s Day, honored by the Gift of Life Donor Program.

As a memorial, Hankee’s family and friends created a “floragraph” of her for the Donate Life float. The floragraph, based on a photograph of Hankee, is made with seeds, dried flowers and other organic material. See photo on top right of Krysta’s completed Floragraph, photo courtesy of the Krysta Hankee Memorial Fund.

Commemorating the Gift of Life
Hankee’s parents, Bill and Chris, were among nearly 100 people who gathered Sunday, December 22 at Union Evangelical Lutheran Church in North Whitehall Township to put the finishing touches on the floragraph. See photos from the Morning Call of Krysta Hankee’s family completing a floragraph in her honor.

About the Donate Life Float
Each year, the Donate Life float’s memorial floragraphs honor deceased organ, eye and tissue donors nationwide. Through these artistic portraits – most of which are decorated by the honorees’ family members – they honor them, their families, and donors everywhere.

Krysta was an organ donor; her organs helped save five lives.

Krysta, daughter of Bill and Chris Hankee, collapsed while exercising in a gym in New York City in September of 2007, at the age of 22, and died a few days later. She graduated from Northwestern Lehigh High School in 2003 where she excelled as a student and athlete.

About the Krysta Hankee Memorial Fund
The Krysta Hankee Memorial Fund was established in Krysta’s memory. The Fund wishes to present a monetary award in the amount of $1600.00 to one full time Lehigh Carbon Community College student (male or female) displaying high academic achievement & planning on continuing their education at LCCC. Find out more.